"TO BE a LIGHT of the World" 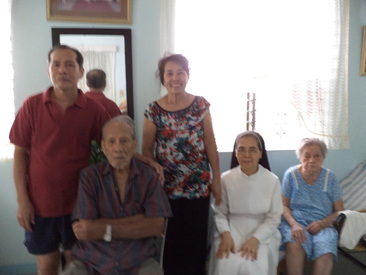 “She is more precious than corals, and none of your choice possessions can compare with her.” (Proverbs 3:15)

Elfleda or Elda as she is fondly called is the second to the eldest in our family.  At the time she graduated from elementary, my mother gave birth, one after the other with less than two years spacing each from the seventh to the ninth child.  Life was extra difficult during those years.  Delia, our eldest managed to get through her studies through a scholarship.  My mother needed to help my father in earning a living by selling native snacks.  But since no one could take care of us (7th, 8th and 9th) while father and mother were working, Elda had to stop going to school.

While looking after us, she worked as a laundry girl.  She said that the three of us – Rosemarie, Cleofas and I were docile enough to be left on a big laundry basin.  She would entertain us with the sepal of a ‘makopa’ fruit by letting it twirl around us.  We were delighted with that simple natural ‘plaything’.  Later, whenever I would see a makopa, I would be reminded of the simplicity of our needs.  I never had a Barbie doll, or a rattle, nor did I enjoy the comfort of a stroller.  But my sister kept us all contented with the whirl and twirl of the makopa.

Elda stopped going to school for six long years.  That means she never resumed schooling until our youngest was ready to go to school.  At that time, her peers were already in third Year College.  It must be very embarrassing on her part to resume schooling and stay at first year high school level.  At 18, she was to be the oldest and tallest in her class.  But she didn’t mind it.  She was just determined to go back to school and earn an education.  What a woman!  She finished an education course and later became a good educator.

I will never forget Elda’s sacrifice for the family.  And through the succeeding decades of years, she continued giving herself to us and to her own family.  She had borne crosses in her lifetime.  But she never gave up.  For more than ten years now, she had been taking care of her husband who became paralyzed after a heart attack.  At present, she is patiently taking care of her 4 grandchildren.  I could narrate of a lot of tales about her sacrifices.  But just to think solely of the sacrifice she did for me already merits my lifetime gratitude to this woman who taught me about God’s love by her self-sacrificing deeds.

She is indeed “more precious than corals and none of my choice possessions can compare with her”!